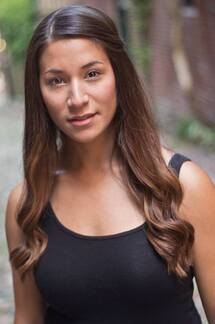 Tell us a bit about yourself, where you're from (local or otherwise), what are your mixed races?
I've been a theatre lover for as long as I can remember. After a strong upbringing as an audience member and “home performer”, I finally got involved with theatre in college, where I performed as well as served as Social Events Coordinator, Documentarian, and Producer with a student-run organization at Syracuse University. I then jumped with two feet into the Massachusetts theatre scene, performing in both community and professional productions and making wonderful friends in the process. I've worked at North Shore Music Theatre, Seacoast Rep, The Umbrella, and Footlight Club, among others. Some of my favorite past roles include Éponine in Les Mis, "Somewhere" Girl in West Side Story, Hope Cladwell in Urinetown, and Natalie in Next to Normal.
I hold a B.A. in Music History and Cultures, and am also an American Sign Language student, a former Performing Arts teacher, and a state champion gymnast. I grew up in Reading, Massachusetts, went to Syracuse University, and then settled back down in Massachusetts, currently living in Cambridge. I am Chinese, Norwegian, Portuguese, and a small percentage of other things.

How did you come into theater?  Why has theater been an important part of your life?
I have loved watching theatre since I was little, but did not really get involved until freshman year of college, when I performed in West Side Story with a student-run organization. I began performing in community theatre after graduating college, and soon after started getting cast in professional productions. I now "straddle the line" between community and professional theatre, which allows me to work with people who have chosen to make theatre their career, as well as people who simply do it for the love of it-- I really like that balance. Choosing to do theatre is one of the best decisions I've ever made, and it's my favorite part of my life. Through theatre, I've met my best friends and my partner, I've worked hard to improve and grow, and I've learned about myself and others from every experience.

Was there a moment in your theater life that affected you because of race? And what happened and what did you learn?
My very first community theatre show was Hairspray, where I was (jokingly) scolded for having gotten too much sun between auditions and the rehearsal process, thereby blurring the contrast between the black and white people in the show. I auditioned for a production of Next to Normal where the role of Diana was pre-cast as a white blonde woman, and I was told via email that "No matter how strong your performance in this role would be, it would be distracting and confusing to the audience." On the flip side, I also have not been "Asian enough" for many directors. During tech week of a production of Miss Saigon, I was asked to alter my make-up to look more Asian. In the audition room for an all-Asian production, I was asked, "So, judging by your name, I'm going to assume you are some kind of mix?" (Surprisingly, I was not cast...)
In the beginning, I would brush it off, laugh it off, or even join in on the joke so as not to make others feel uncomfortable. I would flip back and forth between using my middle name and throwing it out depending on what I was auditioning for. I would look up Youtube tutorials on how to make your eyes look bigger AND how to make your eyes look smaller. In recent years, I've realized that it isn't my job to make others feel comfortable, nor to try to fit into someone else's mold. I can really only worry about putting out my best performance, my best audition, my best "me"-- and hope that the casting team is interested in what I have to offer.

Have you been told that your "looks" are ambiguous, that you "could play anything," etc, and how did that impact your outlook on theater casting? Did it inform your audition strategy? Why?
Yes; I've been told many times that I'm lucky to have been able to play as many roles as I have, and I agree. I have gotten to be in West Side Story, Hairspray, Miss Saigon, and In the Heights. But as you've seen in my stories above, not without problems. And for every time I've had a great opportunity due to my race, there's been an opportunity taken away.
About 2 years ago, I made the decision to use my middle name for every audition instead of only some (and changed my name on Facebook accordingly). It was a "coming out" of sorts; many people I'd known for awhile learned I was Chinese for the first time. I decided that, regardless of how many opportunities my ethnic ambiguity might offer, I'd rather communicate to people outright "what" I am so that they can focus on the quality of my performance. Sort of a "Here's what I am, and more importantly, here's what I have to offer. Cast me if you want!"

With all of this growing education and awareness of making theater diverse, inclusive, and equitable, how do you see the theater landscape changing in the immediate future/long term?
I know a lot of people are tired, impatient, angry, and frustrated. I am all of those things, but above all, I am choosing to be optimistic and excited; I am excited for the future landscape of this community. I think we're going to see a lot more color on the stage. I think we're going to hear a lot of new voices in the "rooms where it's happening". I think we're going to experience a lot of new stories. Because even if some theatre leaders don't really want to change, they have to. Change is trendy. And for the ones that won't change, they'll be left in the dust with no high horse to sit on. The train is leaving.